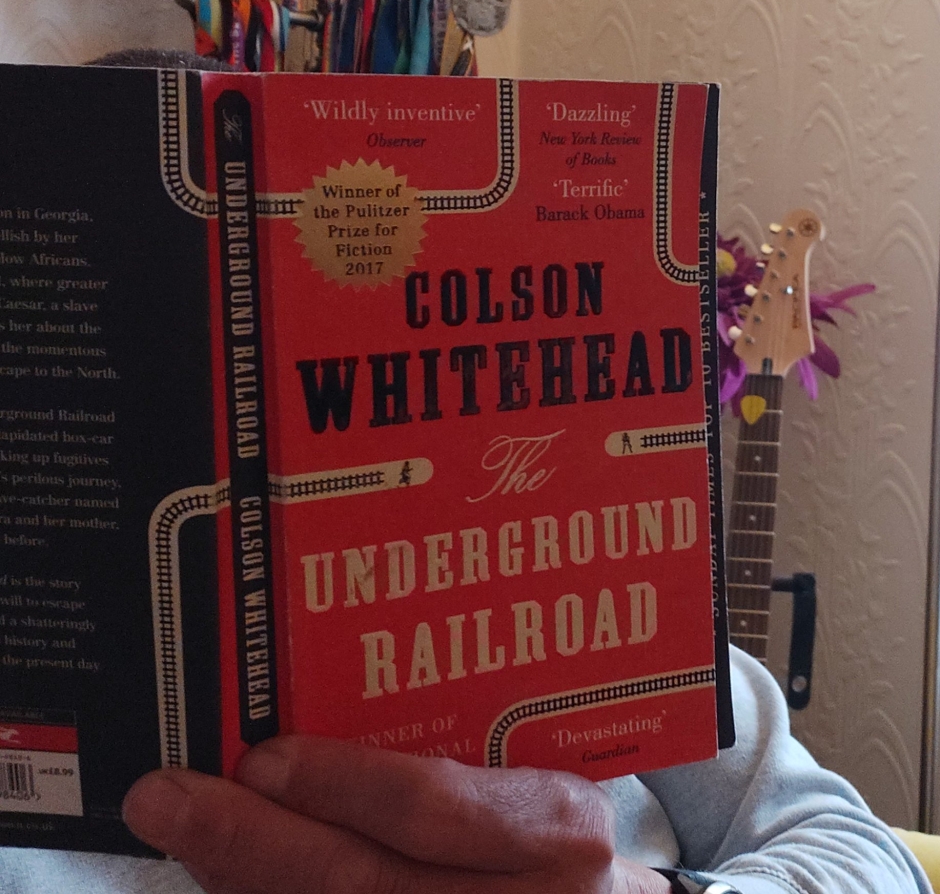 Here we go. Having been humbled by the prose, the depth, the power and the sheer beauty of this book, I’m struggling to find sentences worthy of describing it.

Colson Whitehead’s 2016, Purlitzer Prize winning novel is just tremendous. Why? I shall try and explain.

Firstly, it is exquisitely crafted. There isn’t a wasted sentence in the book. My novel writing ambitions (and indeed, my efforts to date) feel like the surface of a puddle after delving into the oceans of depth on offer here. And that’s before we start on the extraordinary story. This is the second Colson Whitehead book I’ve read, and they have both been magnificent. (The other being The Nickel Boys)

The story is exquisite. Taking the metaphor of The Underground Railroad to mean so much more than just a series of safe houses runaway slaves might use for shelter. In the book, set in the first half of the nineteenth century, there really is a secret underground railway. There are engineers and conductors, each with their own reasons for taking the risk on behalf of the slaves. It is a bright and inventive take on one of the darkest times in history.

I found it scary that even within a few hundred pages I could start to become anaesthetised to the horrors of slavery and the casual murder enjoyed in some of the southern states particularly. The author doesn’t push any parallel with the racism of today, but as a reader, these were never far from my mind. In fact, Whitehead delves further back into history to highlight the massacre of Native Americans rather than labour any contemporary (or indeed populist) narrative. I keep saying it, this book is terrific in ways I’d never thought of.

It is so powerful, honestly. So powerful without seemingly trying to be. The main character Cora finds herself anew in each of the states into which the railroad deposits her. She has followed her mother’s footsteps (or so she thinks, but no plot spoilers). The narrative seems to gather poignancy as the book draws to a close with some breathtakingly, heart breaking moments of realisation.

Cora’s escape from the plantation in the deepest south is far from smooth and throughout the book, literally from start to finish, she suffers unimaginable pain and loss. She really is our hero, and her strength is solid. I could not fail to be inspired to look for everything positive in my own life by her seemingly natural ability to push on.

Colson Whitehead graphically portrays each state’s methods of dealing with “the negro problem” and doesn’t hold back with the horrific imagery. Yes, it is a bruising read, but somehow sublime in its telling. I lost count of the number of times I said to Nicky (my gorgeous wife and fellow member of our two person book club), “I bloody love this book”!

I am left enriched and moved and felt I’d travelled an uncomfortable and torrid journey from Africa, through the deep south into the faintest of promised lands further north.

As I write this in April 2021, I can’t help but think we’ve gone backwards, as a (human) race, in so many ways. I hope that if the time came to be counted, I would be brave enough to become a conductor on The Underground Railroad. This will never be my history. I am in the utterly privileged position to say that. BUT, I feel even more privileged to have Colson Whitehead show me THIS history.