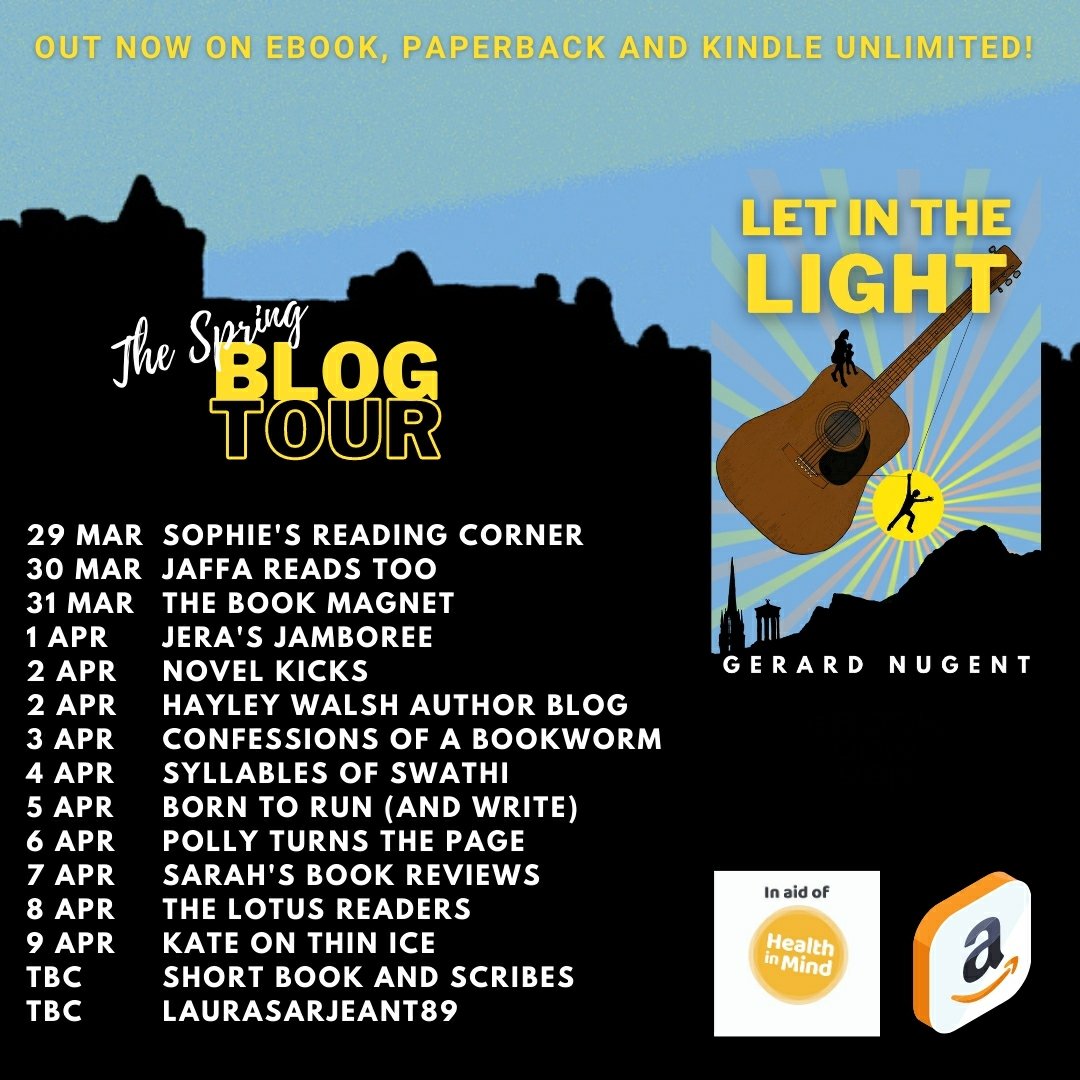 So chuffed to be invited to take part in this Blog Tour.

This is Gerard Nugent’s debut novel. As a natural song writer, Nugent found himself forming the idea for this book after attending a local creative writing class. The idea was to find themes for his next batch of songs, but, combined with a chance encounter with an ex Brit Pop star working in a music shop, he found the plot for a novel forming in his head.

Let in the light is a bright read, the language and prose style both feel spacious – a feel good story some might say. But you don’t have to scratch far below the surface to find there is plenty of poignancy in this compelling page turner.

I like how the author has built this plot. The first half of the book switches between ‘then’ and ‘now’ – feeding us the build up to Richie’s catastrophic 15 minutes of fame whilst following him as he tries to recover in the years afterwards. Set on the fictitious Hope Street, but in the very real world of Edinburgh, Let In The Light has a community of characters featuring on Richie Carlisle’s journey. All of the supporting cast seem to have intriguing back stories and Nugent gives us glimpses into their worlds as they interact with the plot. It wasn’t a surprise to learn that Let In The Light is the first in a planned series of novels about the personalities on Hope Street.

Dialogue is plentiful throughout the book and I found myself drawn into the conversations, nodding in agreement or rolling my eyes as Richie struggles to make good decisions. It is a modern, honest book – the exchanges between Richie and the mother of his child, Pen, are full of truth and expose the pain of their relationship. The responsibility and heartbreak of parenting through separation is sensitively explored. Their son, Finn, is never far from the centre of things, much as it is a tale of how music affects our lives.

The portrayal of Richie’s struggles, the dark times he battles after the failure as a ‘rock star’ and even darker times dealing with the fall out of Penn’s pregnancy and how they struggled to make things work after Finn was born, are all scrutinised. These issued aren’t forced on the reader, there is a pleasing lightness of touch to the language which seems to give us time to absorb the impact of the big decisions in Riche’s life.

As the book progresses, the interwoven histories of the characters are revealed, including Richie’s band mates and his boss in the music shop where he works. I won’t spoil any of the plot, but I think it’s important to note that all of this affects the mental health of Richie and others. The impact of deteriorating mental health is nakedly visible and on at least one occasion quite shocking. Like I said, this feels like a truthful book. Gerard Nugent is supporting the mental health charity, Health In Mind, with Let In The Light and all profits are being donated to this great cause.

A great tale of city life and how communities are formed and revealing that, within those communities, unlikely bonds and friendships can be formed. The writing feels accomplished and the author gives us plenty of great detail around the music and how musicians can work well (or not) together. The relationship many of us have with music, just how important it can be, the power of the song, are also constants throughout the narrative.

Over at AMAZON Let In The Light is currently only 99p for kindle and the paperback is a bargain at £7.99 too.