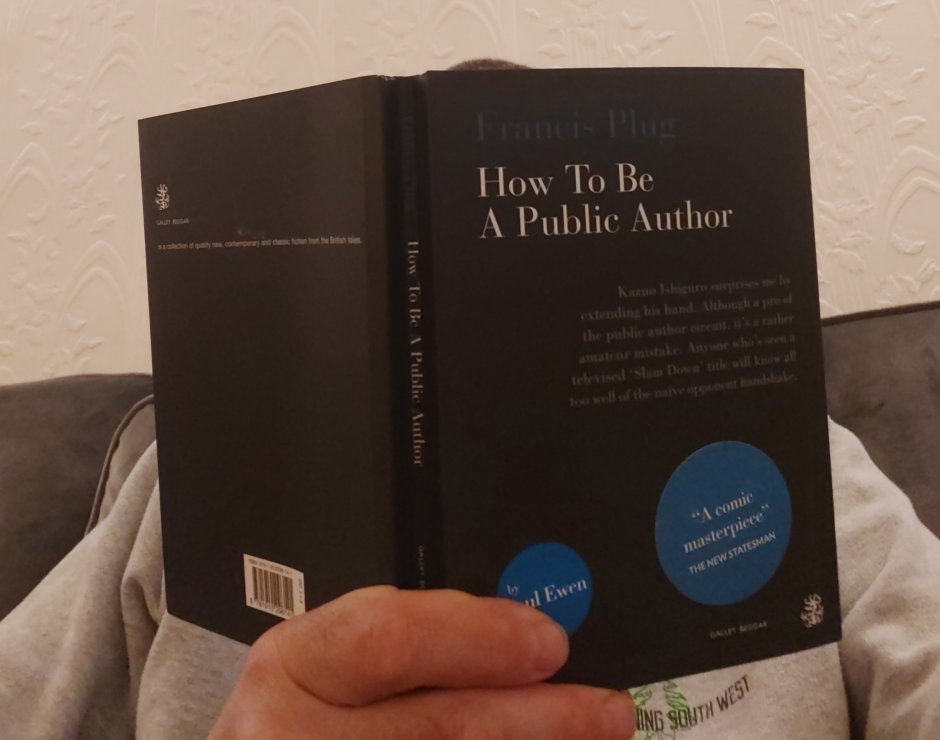 Regular readers (for there are a few!) might remember that I made a few pledges in my manifesto for 2021. One of those pledges was to keep buying books from independent publishers. I chose this beauty from Gallery Beggar in January. Like a full roast dinner I wasn’t put off by it’s size and woofed down all 300 pages in a couple of days.

Paul Ewan has created the fictitious Francis Plug and tells the tale of learning about how authors behave in public through Plug’s eyes. On the front cover The New Statesman declare it “a comic masterpiece”, and I’m not going to argue. From quite early on I found myself irritating my wife as I burst out laughing. Francis Plug isn’t so much a car crash waiting to happen, as constantly in the middle of one. On more than one occasion I found myself looking away from the page cringing as it became apparent what inappropriate questions Plug was about to ask.

Ewan pulls off a neat trick – quite early into the book I was living the story, I’d forgotten that Plug was a creation. He attends literary events, armed with a copy of each author’s Booker Prize winning novel and attempts to get them signed whilst observing the writers’ behaviour, attire and manner. All of this is research for the book he’s writing, How To Be A Public Author. Which, of course, is the book you are reading. Even though it is fictitious. For me, Paul Ewan has been fiendishly clever in making Plug believable – there are pictures of dedications to Francis Plug at the start of each chapter and Plug’s behaviour plays little tricks with the narrative in relation to each author. Or rather Ewan does.

He attends some events as a genuine ticket holder, others he simply waits outside for the signing and others still he enters through devious and dubious means. The same goes for the books themselves, although I won’t spoil this brilliant little twist for you.

For sure it is a literary tale, there are anecdotes about 25 or more Booker Prize Winning authors, but the joke never tires because it is different every time. Parallel to Plug’s literary journey is the disintegration of the rest of his life. There are moments of poignant beauty alongside the humorous carnage. Plug is a lost and lonely soul and I couldn’t help but feel sad for him as his work and meagre domestic life start unravelling. The drink is never far away as he battles his own self-destruction. The ultimate goal is to culminate his research at the actual Booker Prize ceremony leaving him both able to complete the book and also prepare himself for when he is awarded the prize himself. He is happily deluding himself that this is a given.

Written in a such a way that I couldn’t help but march forward from chapter to chapter. Plug notices some charmingly obscure details in each of the surroundings he finds himself. He takes these little details and creates new behaviours for himself. Peeling stickers off the books on supermarket shelves to decorate the trolley handle, whilst adorning the books with labels he’s taken off the fruit. Maybe it’s just my humour, but those quirky anecdotes kept me smiling throughout the book.

My lovely wife Nicky has just started reading Wolf Hall and so I had to share with her Plug’s challenge that maybe Hilary Mantel had made up the name of the town where she lived, Budleigh Salterton, in order to throw people off the scent. A quite lovely scene.

Now that I’m working harder at my own writing I can only imagine the years which have gone into creating such a richly detailed tome, whilst retaining the light hearted romp through the literary world.

There is a sequel. It will soon be joining my ‘to be read’ pile.

If you’re interested in what else I’ve been reading have a gander here. Or for more reviews, why not feast your eyes here.