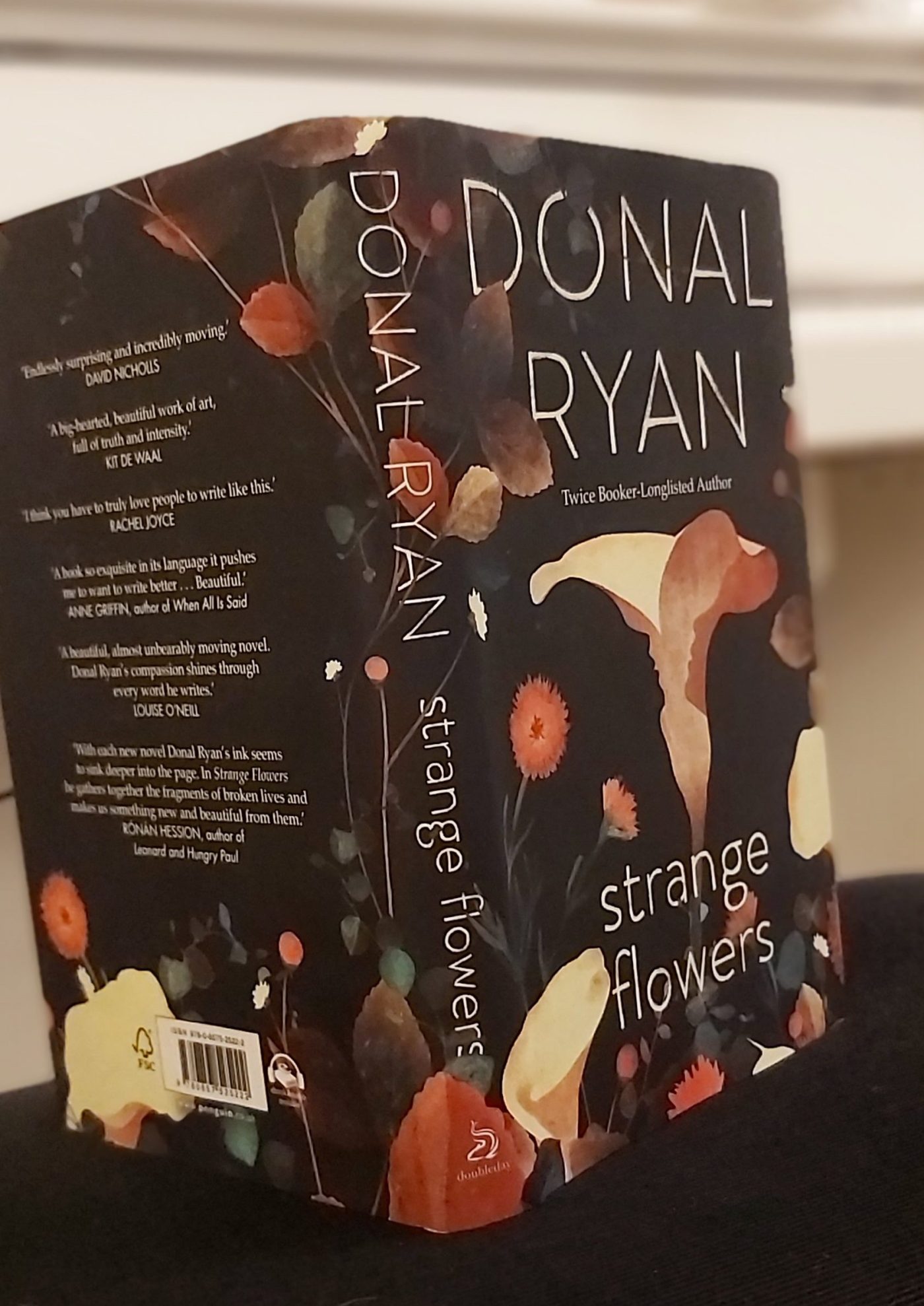 On a day off work, with our exercise, work and dog walking done, we enquire of each other “are we in?“.

Gentle music on, dog snuggled on the sofa, books out. Interrupted only by the need to eat.

Our two-people-and-a-dog-book-club goes from strength to strength.

We very often end up enjoying the same books. If we time it right, we simply swap as we both close the cover on our latest reads.

Nicky has recently enjoyed Strange Flowers and was fairly certain I would too. “Quite different and exploring so much.” she described it to me. So, as Nicky got stuck into Deborah Orr’s childhood memoir, Motherwell, I set about Donal Ryan’s latest offering, Strange Flowers.

I recently heard the author, Donal Ryan interviewed on Radio 4’s Books And Authors and found him to be engaging, humble and quietly hilarious.

I wasn’t to be disapointed, it is an exquisite read.

If I wrote human beings even a hundredth as beautifully as Donal Ryan, I’d be a proud scribe. Ryan’s characters aren’t just fully formed, they’re multi-dimensional, you can feel them around you. He places them. I experienced the story from all angles, like being sat amongst the most subtle of surround sound systems, every voice pulls your attention in another direction.

Set in rural Ireland, the story starts in 1973 when Moll, the only child of Paddy and Kit, ups and disappears aged 20. The parents lead a simple life which is devastated with the gradual realisation that Moll may be gone forever, her fate unknown.

The pain suffered in the years after Moll’s disappearance, and the toil of Paddy and Kit’s life is deftly articulated. As they toil on through life, never recovering, one day Moll simply walks back through the door.

Where she has been, why she left, and what and who she brings back into the simple, rural life is a master class in plot and story telling. There’s no dramatic revelation, no big, attention grabbing scenes. The lives of those close to the family, the people Moll has been with while away, and those of the rest of the villagers are gently knitted together as beauty, tragedy and realisations ease into the story.

Donal Ryan, who has twice previously been long listed for The Booker Prize, tells of love in layers. He shows love for some can be delicate, fragile, brittle almost. But he also shows love at strongest, combined with loyalties which can suffocate. The way faith is threaded through the relationships and how religion can both dominate and soothe is also carefully and honestly portrayed.

It is a tale of people. In this small family, and those close to it, Ryan has held a mirror up to us readers and let us deal with our own instincts. The complexities of race, of religion, of status, class and ownership, of sexuality, of coming of age and of bravery and fear are all exposed. His telling of the characters gets the reader under the skin of their exchanges. The man knows people, he knows emotion. The novel oozes emotion on every page.

I found I needed to absorb every single word. to me there isn’t a wasted sentence in the book. It’s early in the year but if there’s going to be better reads than this in 2021, I’m going to be feasting on words. When the book ended, which it does with a gorgeous light touch, I found myself nodding and watery eyed but contented and almost wishing to go straight back to page one and devour it again.

Check out what else I’ve been reading in 2021 and the books I enjoyed in 2020 too. If a book has grabbed me and time allows, I tend to write a few words about it.

One thought on “Strange Flowers by Donal Ryan.”