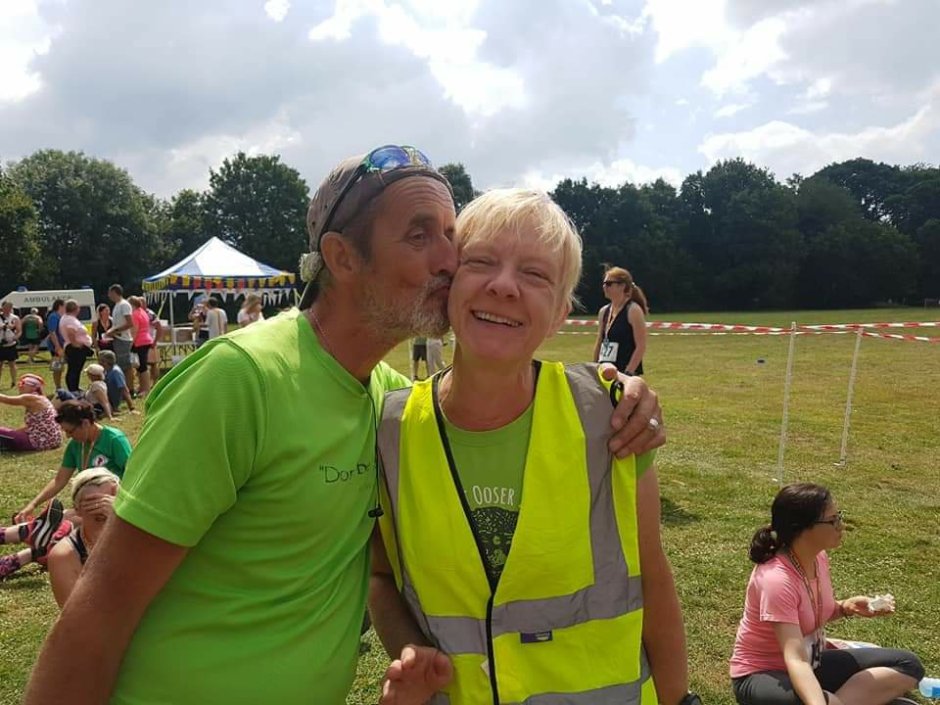 “We will get through this, we must be patient, races have and will come back.”

Kev Day, with the sort of positivity we all need.

My series looking at some of the characters behind trail running events in the South West continues as we meet Kevin Day from Badger Trail Events.

Kevin and Denise Day are the fabulous team behind Badger Trail Events. This really is a team operation. In fact Kev (he prefers the shortened moniker) goes to great lengths to point out just how motivational Denise is throughout this q & a. He reminds me of me, and not just because we are namesakes: Like I do with Nicky, he sees the whole of life as being faced by a team of two.

Badger Trail Events’ first race was the Ooser Marathon in March 2018. The race having been launched in November of the previous year. Kev had taken a break from the whole world of routing and planning trail events, having cut his teeth as part of another of Dorset’s event organisers.

Many of us were already fans of Kev’s routes, having enjoyed some of White Star Running’s great offerings, such as The Giant’s Head Marathon. Whatever the reasons for his departure from that organisation, it isn’t really any of our business, nor is it particularly relevant. Anyway, as it has turned out, it has meant even more Dorset based events for us to choose from.

Before we delve into the birth of Badger Trail Events, a few personal memories. At those earlier events, Kev was part of the great atmosphere and was always out on the course, checking in with the aid stations, the tail runners, making sure the leaders were going the right way and generally offering banter and encouragement. I particularly remember on a baking hot day, Nicky and I being pleased to see him magically appear in the pick up truck with bowsers of water to hand out in between official drinks stations.

Oh, and he always had his badger sporran on display, hence the ‘I felt the badger’ badges which became stuff of Dorset legend. Nicky certainly earned hers!

I digress. His self employed handyman business had already taken a back seat to race organising and he found himself encouraged to dip his toe into going solo. Except he wasn’t alone. Denise and a few close friends managed to convince him to stage The Ooser. A route was already in his mind and so Badger Trail Events was born.

Denise nervously took a step into the limelight to be Race Director. Kev concentrated on getting the route just right and reverted to his role of being everywhere at all times on race day. The support and encouragement of their network of friends (who really should get a mention; Rose, Mike and their son Elliot, known as ‘mini-badger’, as well as Jenny and Beverly) meant that this first time event was a huge success.

“The day went well. Denise was a little scared being RD (she hates speaking to crowds of people). But she did a great job. I was out on the course following the front runners and keeping an eye on the sweepers, whilst trying not to be sick with worry. I got back with the last runners to the news all went well.”

The team Kev and Denise have put together delivered The Ooser again in 2019.  Around 500 runners tackled either  the marathon or half marathon. The route explores Dorset’s hidden and forgotten trails, ancient woodlands, farmland and featuring plenty of mud, water and hills.

They managed to get two events staged in between the lockdown periods this year, and those who were able to run were quick to complement the Badger Trail Events team on how well they had been staged.

“You and your team did the best job. I managed a few events between July and now and none were as well organised and thought through as yours. Also, you have the best routes and medals and the meanest of hills”

Both Kev and Denise have been heavily involved with creating and supporting, not only their own events, but also Parkrun and Junior Parkrun. From personal experience, I can also confirm that they are likely to pop up at all sorts of races, helping out and cheering on the runners. I remember Kev appearing nearing the finish line of The Dorset Villages Marathon one year, as I stumbled towards it!

During the first lockdown, Kev was liaising with other event organisers and Parkrun, constantly looking at ways in which running could be a community event again.

I asked Kev how he was feeling about 2021 for Badger Trail Events in light of, you know, everything.

“Positive. That’s all you can be. The Ooser is due to go off on the 4th April, The Hellstone in late May / early June (sorting dates with the landowner) and hopefully, The FUBAR & SNAFU will happen once again at Bovington.”

And Kev really is positive when it comes to future events, a lesson to us all. Referring to the Ooser again:

“What with the vaccine and also the covid measures in place, we may get back to the 800 runner mark.”

The Hellstone is a marathon, half marathon and 10k set in open countryside, with “devilish hills”, a stone circle and even a cricket pitch.

As for the Bovington races, they are staged at the tank museum and tank driver training grounds. Having raced at Bovington on a Kev course, expect a bit of mud! FUBAR and SNAFU? You’ll have to google it!

Kev and Denise certainly aren’t desperate to flood the market with new races, but they are constantly on the lookout for new and different venues. When pushed for ambitions with regard to future races, Kev had this mouth watering teaser:

“We would love to do something along the lines of the Barkley Marathon (“the race that eats it young”). We’re on the lookout for a route……”

When it comes to their own running, Kev quickly wants to talk about Denise’s incredible achievements and skip over his own. Before we delve into Denise’s rather impressive palmares, a little story of how Kev got into running. Those of you who read my piece on Bys Vyken will know that David (Bys Vyken’s founder) found motivation in chasing a friend when getting into running. Kev is the same. Having played football, rugby “union of course!”, cricket, raced motorbikes and even represented Dorset at pool, He found himself goaded into a running challenge:

“I was 20 ish….. A Scottish guy I worked with had entered a 5k run. He boasted how quick he was (he’d had trials with Rangers F.C , so was fit). To shut him up, I entered too, saying I would beat him. Doh! 3 months of training, over Blackhill in Bere Regis, paid off on the day, I beat him by around 10 feet!”

Kev didn’t really know about running clubs and just carried on training on his own. He got faster and fitter (running under 20 minutes for a hilly 5k). But, he’s far more interested in sharing Denise’s story….

“Denise’s journey into running started even later. Approaching a certain age (editorial licence used here!), she was worried about putting on weight…….. she worried about it so much we bought a dog……. a great excuse to get out and exercise”

Dogs are such an important part of life in the Badger household. In all weathers, every day, Denise and the dog were out there. She then felt the urge to start jogging during a walk and before long had found out about Parkrun and was keen to be fit enough to run one.

With Kev pretty much stopping his own sport, he became, alongside Max, Denise’s cheerleader.

“I helped, cajoled and encouraged Denise to get out and run. I showed her how to land on her feet, all about cadence, what to eat, getting her mind right and so on.”

This worked too as before long they were celebrating a non stop mile. A month later they were again elated as Denise completed her first Parkrun. She slept for 2 hours afterwards, but a runner had been born. As Denise told me, Max the dog became her ever faithful training partner.

“When I started running seriously in 2011 (training for my first ever race – The Great South Run, because of a work challenge) we had Max. He did all my training with me including first marathon the year after (2012 London)”

Denise – thankful for the fittest dog in Dorset!

Max was joined by Daisy a few years later and the dogs went on every adventure. Sadly Max passed away earlier this year. Daisy wasn’t lonely for too long though as the wonderfully named Bear has now joined the gang.

“Denise has done most of the races in Dorset. She has also done the Chamonix Half and Full and the Ex to Axe, a nasty 22 mile trail race, also her first (and possibly last) 100k run. She’s still running and one day I’ll make her do the Ooser (maybe year 5 in 2022).”

Denise remains motivated to keep fit and keep going, with Kev always in support. His own motivations are (like so many we meet in the great trail running scene) philanthropic:

Kev is a bit of a talent spotter too. Noticing young runners showing promise at Parkrun and being instrumental in getting them teamed up with coaches to try and realise their potential. Denise too likes to encourage and be a role model. Her own daughter has started to really enjoy exercise with the example shown by, and with the encouragement of, her Mum. Another runner born, with a marathon planned for 2021…

I ask everyone in this series what their proudest running moments have been. Kev is sure that Denise would say her 100km ultra marathon. And Kev himself? “What Denise has done”!

The couple are rightly proud of the achievements of Badger Trail Events so far, as well as humbled by the fact that so many people choose to run The Ooser as a first marathon. As Kev says, “it’s not flat!”.

Kev acknowledges that this venture deprives him of any financial security or space in his home (something Brian of Winding Paths also told us in his interview). Sometimes he questions his sanity too. BUT, both him and Denise are inspired and enthused by the runners who sign up to their events and make race days so special.

It has been an absolute pleasure to catch up with Badger Trail Events’ story and I’m sure this most inspiring and popular of couples will take their events from strength to strength.

One thought on “Badger Trail Events”