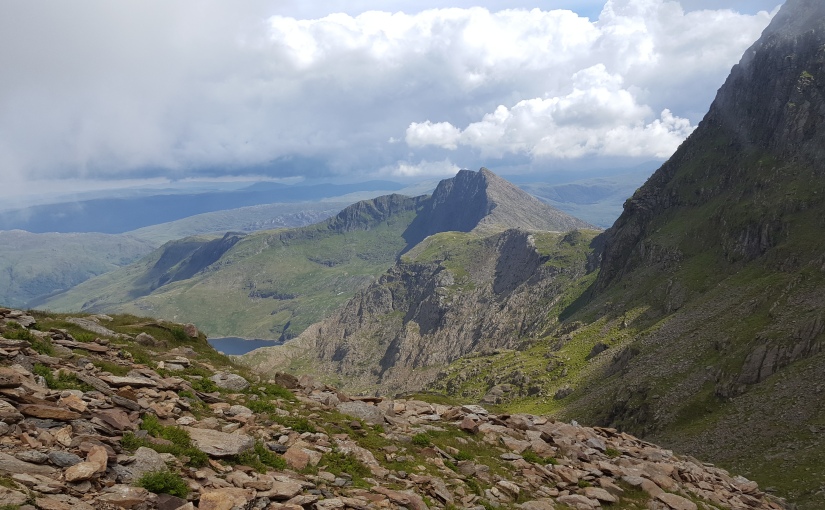 Prior to this weekend just gone, my proudest ‘Team Bonfield’ moment had been when we crossed the finish line of the Dartmoor Discovery 50k Ultra just inside the time limit.

The Snowdonia Trail Marathon topped that, in so many ways. WOW. Too many breathtaking views to take in. WOWs  by the sack full.

Ahhh, the dreaded cut-offs. Only one here, after the climb up to Pen Y Pass. About 19 miles in. From there it’s up the mountain proper on the Pyg Track.

As we left the starting pen in Llanberris, nothing was certain. Nearly 700 runners, some strutting, some staring, some nervously pacing or muttering (‘madness’ whispered one guy as he fidgeted and fussed), listened to the race briefing.

Yes we can hear you at the back. Yes we can clearly hear that it is VERY important not to veer from the route and DEFINITELY not climb any gates or fences. More on that later…..

We had dined with my brother and his wife, who live in Kimnel Bay, a feast on the eve of this epic adventure. Regular Snowdonia hikers, they were eager to share their local knowledge and we pored over the route to get ‘beat the cut off’ tactics in place.

9am. A brief road section through the crowds of spectators and Half and 10k runners awaiting their turn. Then up.

Nicky pushed hard here, brisk hiking the steepest bits, easy paced running where possible. When we reached the top of this climb, the 3.5 miles had taken us about 15 minutes less than my loose plan. Result.

Some moor like terrain, downhill and flat and we were feerrrlying…… oh hang on….

A queue. When I say a queue, probably about 200 people waiting to negotiate a stile. Hhhmmmm.

Some, whose race was obviously more important than ours, decided climbing a padlocked gate followed by a wire fence would mean they didn’t have to wait like everyone else.

Absolutely infuriating when, after 15 minutes, the marshall charged with the unfortunate task of policing this area shouted to the approaching runners at the back of the field to take this alternative route…….

Nicky had worked so hard to get this far in this time, yet, now I was contemplating the cut off again whilst participants who had taken considerably longer on the climb didn’t even pause as they disappeared off ahead of us.

Potentially, a scenario where some of those runners who hadn’t had to wait at all, but took 15+ minutes longer than us over the first 4 miles, narrowly made the cut off whilst we narrowly missed it, was starting to play out in my head.

Once we were over the stile, and then through the next couple of miles and occasional further stiles, we made great progress on the rough terrain. Unfortunately the field of runners was out of sync now and we were constantly trying to weave through those who had been behind us until the stile incident. Or stilegate, as it shall be known.

Once we’d reached mile 6 we had found some space to run in and easier terrain for a while. A familiar face, Kevin (a regular face at events we have enjoyed in Dorset), greeted us at this point which was a real boost as well. We settled in to rattling off some miles as we ran through forests, around lakes, alongside miniature railways. All to the spectacular backdrop of the mountains around us.

I made a pact with myself to take no pictures until we reached that cut off. After negotiating a runner-jam in a single track section through the woods at the bottom of Pen Y Pass, we freed ourselves from the pack and marched the 2 mile climb to reach the cut off with about 40 minutes to spare.

Now the hard climbing started. Please forgive us a smug moment here! We are rather proud to be running grandparents knowing our grandchildren can point at a map of Snowdon and say ‘Nanny and Grandad’ did that!

It’s a great leveller, a mountain and we were amongst runners of all ages as an unspoken comradery developed.

Nicky, strong as an ox. The climb is about 5km long from that point and is pretty relentless. It scrambles and winds and teases then punishes and it does go on and on. All to the incredible backdrop of the peaks and ridges all around.

My sister, Karen, who regular readers will know, was taken from us just so tragically early, would have loved to see us doing this. She would have revelled in the happiness I have found with Nicky and would have been championing us in all our adventures. I wore my ‘Karen Ribbon’ for this run, and definitely felt a gentle extra push as we reached for the top of the climb.

Talking of which, it turned out my brother, mother and uncle were all glued to the tracker and shared in our ‘YEEESSS!’ moments ‘live’!

Suddenly, through the descending mist (which was quite welcome as the heat was starting to build), a high-viz vest in the distance, still way up above us, but a welcome sight. 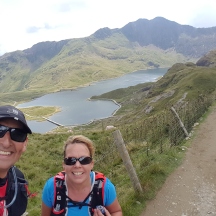 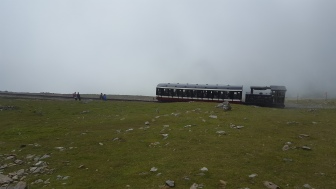 Exiting the other worldly atmosphere of the Pyg Track as the tourist trail becomes the Miner’s Track, with the train passing too, was completely bizarre and quite magical.

Knowing it was quite literally all down hill from here, we high-fived and then set about the descent…….

Unfortunately, almost immediately, Nicky had a sharp and immobilising pain in the back of her knee. This stopped us in our steep and gravelly tracks, on this, er, steep gravelly track.

A fistful of vitamin I (Ibruprofen), gently and gingerly building up speed, we soon got up to ‘Ahhhweeeeeee’ velocity as we tumbled down and down and down.

Llanberris was soon coming into view, as we went further down and down and down. The very bottom of the descent was sooooo steep as it turned to tarmac before a naughty loop through a park and we could clearly hear the announcer calling the runners in.

We truly felt (still feel) we had achieved something extraordinary.

A fabulous, brutal, beautiful event. It’s big, probably 2000 runners across the 3 distances, yet it was so welcoming, brilliantly marked and marshalled (I think stilegate is a glitch, it needs addressing, but certainly the only real blip) and the event base in Lanberris has the cosy feel of a much smaller event. 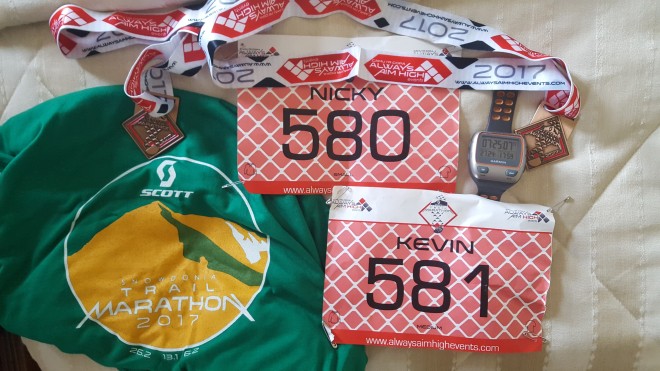 It wasn’t necessarily on our bucket list, but it has given us a wonderful glow……..

Ordinary bloke, likes a bit of running, a bit of writing, a bit of reading and a lot of loving my beautiful wife ❤ View all posts by Kevin Bonfield